SG Berlin is a women's floorball team. They originate from the Berlin based clubs Berliner Turnerschaft and Berlin Rockets and form the team together. A long term goal is to etablish women's floorball in Berlin in such a way, so that each club can put up its own team. However, until then its still some steps to take.

SG Berlin is playing in "Damen Regionalliga" in the eastern division, where there are five teams.

Each season the SG Berlin sends a youth team to play in the eastern small field division. Their biggest success so far was finnishing the Deutsche Meisterschaft, German Championchips, on the 4th place in 2015.

We are constantly looking for new players, all ages and with or without having played before. If you are interested in this fast team sport, do not hesitate to contact us.

We are looking forward to playing with you!

In order to promote women's floorball in Berlin, somewhen around the 2009/10 the women's teams of the two clubs Berliner Turnerschaft and SG BA Tempelhof decided to train and play together. SG Berlin was born. First, they played the so called Pokal, where about 6-8 teams from Munich to Bonn took part. Besides, SG Berlin tried their luck in the regional men's league, which turned out not to be the preferred solution.

Until season 2013/14, SG Berlin has played in Germany's newly established highest women's league, 1. Floorball Bundesliga (1.FBL), in the eastern division. Opponents were MFBC Grimma, UHC Sparkasse Weißenfels and SG Chemnitz/Heidenau. However, due to the withdrawal of some teams, the 1. FBL currently doesn't exist anymore. Here some more efforts in developing women's floorball has to be done.

In season 2012/13 SG Berlin decided to take part in the regional small field competition in the SBK Ost, which included teams from Thüringen, Saxony, and Saxony-Anhalt. This turns out to be a good way to gain some practice and play other women's teams, even though driving efforts are comparably high.

In 2013/14, SG Berlin also sent their first youth team, a U13 girl's team, to play in the SBK Ost. Since then, the goal is to send at least one girl's team to play the eastern youth league. 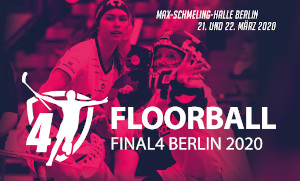